Gallivanter swung peacefully on her anchor all night and we slept soundly. 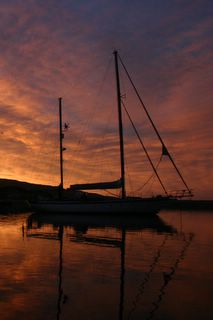 And mother nature treated us to a fantastic sunset as the end to a wonderful day of sailing. 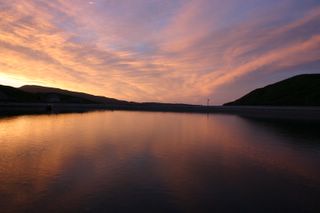 After 50 miles of sailing from Scrabster, the coast opens a small gap to offer refuge to ships and yachts in Loch Eribol. During the second world war, Russian and British convoys used to gather here before beginning their dangerous journey to America. In one of those frequent twists of history, Eribol was also the place where their tormentors, the German U-Boat fleet, surrendered to the British in 1945. Now, it is a peaceful haven with a beautiful anchorage formed by a limestone spit and island halfway down the loch. 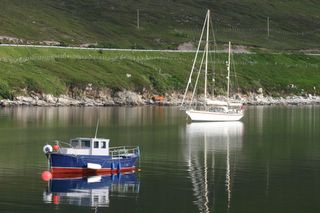 We went ashore to explore the shore, this is Andy looking deeply into on of the many pristine rockpools. 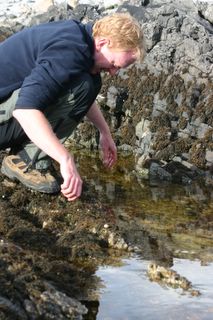 Wildlife, too, enjoys this empty place, being so much more at home here than us temporary visitors. The dolphins had places to go, and only turned for a brief look at Gallivanter before continuing on their way east. We looked forward to pods of dolphins leaping in the bow wave, but is was never to happen during my two weeks. 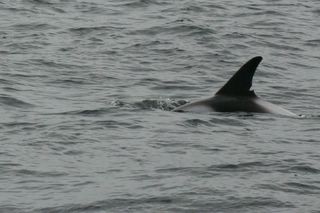 Outstanding rock structures appeared every few miles. This stack is perched like an outcast from Easter Island, stuck on an inclined plane of sandstone and just waiting for the sea to eat away too much of the base and bring him tumbling into the water. 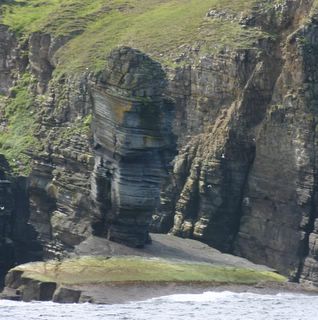 The 55 mile trip from Scrabster to Loch Eribol was characterised by the wild cliffs and open waters here at the top of the country. Although the winds were light, the rolling atlantic swell was ever present, speaking of thousands of miles of open ocean and a breeze blowing from the shores of Canada and the US. The swell breaks heavilyon the shore even in good weather; this place is wild and dangerous when a proper storm blows in. 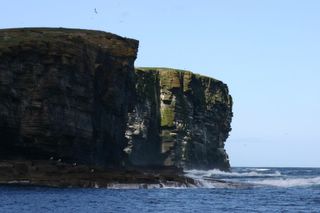 And a washed up jellyfish - almost as beautiful as when it was swimming, but sadly condemmed to dry out before the tide returns. 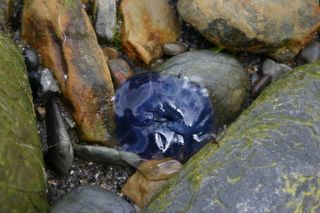 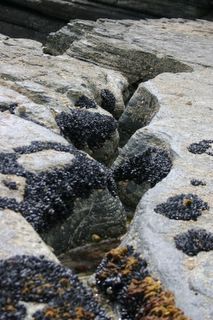 In this rock, cracks have filled with another material before it hardened, making the geometric patterns. Here, a mussel nursery has grown up with the baby mussels only attaching themselves to the material in the cracks. 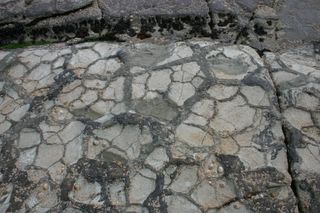 Give it a couple of hundred million years or so, and the right conditions, and you can see a very similar ripple pattern in this lump of sandstone 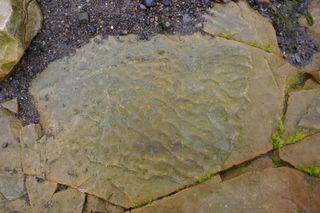 Scrabster was a nice place, stayed for a couple of days. To give you an idea of what the team does, we took a half mile walk along the beach. It took 4 hours! We looked at so many different things about the geology and wildlife of that short area. Here, you can see the simple ripples in the sand caused by the wave action on the beach. 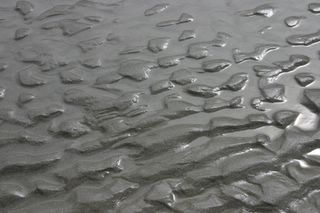 And as we motored on towards Scrabster, we saw a pilot whale, and stopped engines to watch. We were just off Dunnet Head, the most northerly point of mainland Britain, and drank a dram of malt whisky to celebrate whilst watching the sun set over Hoy (and the Old Man of Hoy, the famous climbing stack of rock). We poured a dram into the sea to thank Neptune for letting us pass so gently by. 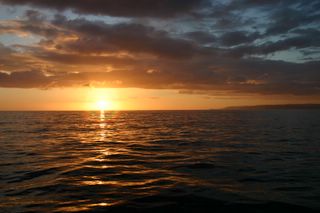 The water took on a glassy, alien appearance as golden yellow and electric blues played over the surface 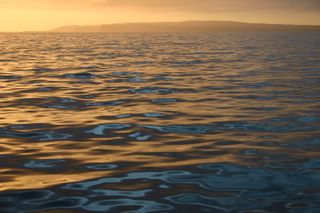 The sunset over Stroma was fabulous, and these are just a few of many great photos.

We passed John O'Groats at 9pm, heading slowly for the Rocks of Mey, the start of the vicious tidal race called the 'Merry Men of Mey'

Currently we are struggling to get acceptable connection speeds to post stuff, so here is a really cut down selection. This is Duncansby Head, the entrance to the fearsome Pentland Firth, graveyard to many ships and men. for us, the Firth was quiet, windless but still menacing with storm clouds and sunshine mixing to give a dramatic and awe inspiring evening. 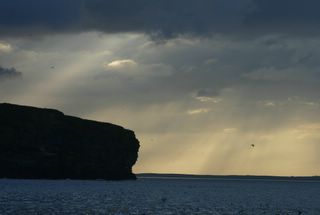 Portmahomack is a very pretty place, we enjoyed it. 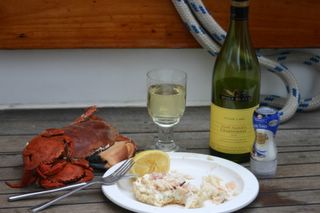 Back on board, I was sorting out a few things when the crabs arrived. Lots of crabs. We ended up with a bucket of swimming (or velvet) crabs and a bucket and a half of big brown crabs.

The excess brown crabs ended up in the cockpit and scuttled off to the nearest hidey hole - the cockpit drains, where they holed up and peered out defiantly. I responded in kind by cooking their colleagues. We cooked a couple of the velvet crabs too, but they are bery small and fiddly so the rest were released back into the wild. Greg donned an oven glove and enticed the crab out of the cockpit drain before releasing him too. 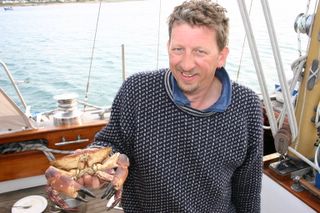 We all slept late, till well after nine, rolling gently in this sheltered anchorage. A simple breakfast (toast, OJ, coffee) and we launched the dinghy for a trip ashore. Tying the dinghy against the local fishing boats, we asked a local fisherman about the area. Founded sometime in the 10th century, the village is steeped in history and a lot of that revolves around fish. In the 18th and 19th century, there was a huge herring industry employing around 10000 people in the height of the season. In addition, in one year, sometime around 1790, over 70,000 lobsters were landed and shipped off towards London. Today there is very little, some lobster and crab fishing, a few wild salmon, and a wealth of second homes.

We talked to the fisherman for a good half hour, and parted with an offer to drop a few crabs on our deck for our lunch. We walked on, and the guys began to study the area.

After rounding Tarbert Ness, we anchored in the beautiful bay at Portmahomack and ate dinner (Steak, mashed pot, peas, corn, Rioja) and watched the sunset play beautiful games with the cloud formations. I was exhausted after a long day and probalby minor sunstroke, so retired early for a long nights rest. 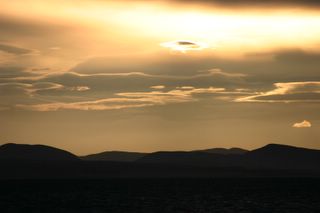 Ian took a stroll around his estate. The mast steps make it really easy to climb up, and the sunlight had brought out a bright blue sea which, if you climbed up, was striped with patches of darker blue. We had a lively, and unresolved, debate about why. Cloud shadows? Depth? Type of seabed? Answers on a postcard please. 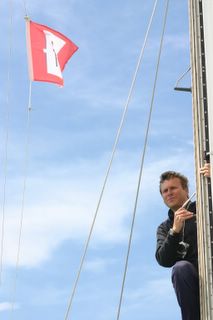