As you may recall, part of the point of this week ashore has been to get in the rental car and go look at places we might think about settling down, as well as just getting a feel for this part of the island. So here are a few photos and thoughts about where we've been. 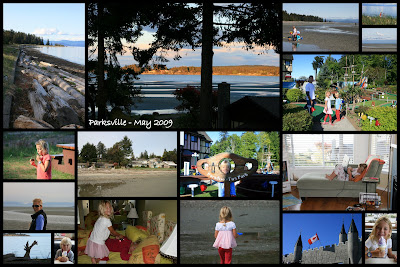 We're staying in Parksville, at a lovely flat (condo) in a nice little beachside development. It's a great place for a holiday, and that's what the town is about - lots of rentals, holiday homes, beachfront and attractions. The provincial park next to our place is a nice forest walk, the views over the beach and to the mountains on the mainland shore are fabulous. We played mini-golf because the kids really wanted to, and we've been able to stock up at the big supermarket, get a video from the rental store, and all the other nice things about being ashore. We also celebrated Mother's Day (different day to the British one) with Gesa getting a massage from Issie and Max! It's too much of a seaside vacation town for us, though, as a place to live. 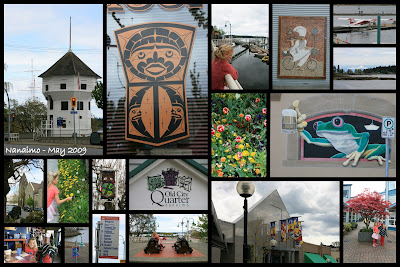 Nanaimo is a major gateway to the island, being the other end of the ferry to Vancouver City. We last saw it ten years ago, as we drove off the ferry. It docks in the scruffy, cargo dock part of town and leads you rapidly out through commercial sprawl. We were unimpressed. This time, we went to the heart of the city, which is really a mid-sized town, and walked around the ten or so blocks that make up downtown. It is really nice, with some historic buildings - Nanaimo was built on coal mining and export - and a very attractive waterfront. We'll be unloading Ty Dewi here and spending a bit more time in the city so we'll explore some more. Much as we like it, even this small city is bigger than we want to live in, so it'll be nice to have Nanaimo in easy reach without living right there. 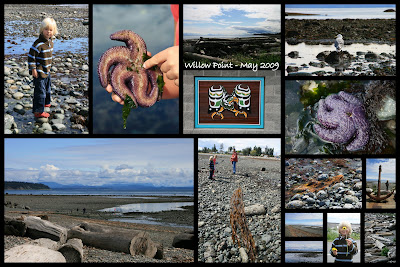 Willow Point is really a suburb of Campbell River, the main settlement halfway up the island. Above that, there's little but wild space and wild small villages until Port Hardy at the northern tip, so Campbell River is our northern boundary for places to live. Here at Willow Point we found a lovely stretch of beach with massive driftwood logs, neat purple starfish and other critters, and some nicely done signs and 'interpretation'. The rest of the area is nice but quiet and suburban, didn't really push any buttons for us. 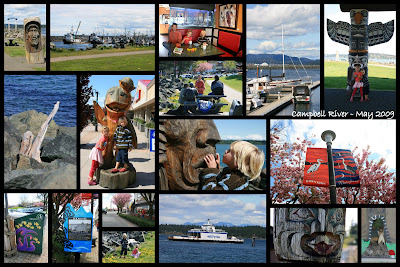 Campbell River is much more interesting, a lively waterfront and clearly a major town in this part of the world. Quadra Island is just a half mile across the water and that creates strong tides between, we watched ferries and boats being swept forcefully along as they transited the narrows. Around the town, many signs show the history of the area and the massive changes that have happened since the fifties, when much of the waterfront was just a muddy pile of logs being shipped out. Now there are highways, ferry docks, marinas and, just back from those on reclaimed land, shopping malls and public spaces. There was plenty to interest us in the town, and the surroundings are truly fabulous, just minutes to mountains, lakes and waterfalls. As a place to live, though, something didn't quite click. Perhaps it is the recent nature of the shopping areas, the way that the shopping malls replace much of the high street and leave parking lots as a major visible part of downtown. The marinas would be a great place to keep our boat though, if we can get a space - everywhere has a waiting list, so it seems.