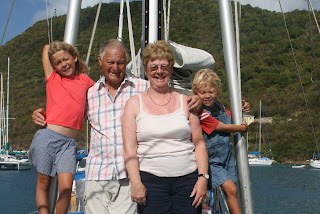 Hard to keep up right now, so here's a summary:
- Corrine, Edo et al left after a great couple of weeks, rounded off by a lovely dinner at the Tamarind Club on Tortola
- Very nice week exploring new bits of the BVIs with Mum and Dad including a campfire on a secluded beach and a night at the popular CaneGarden Bay.
- Farewell to Mum and Dad from Sopers Hole, West End of Tortola. They left for the airport, we cleared customs and sailed straight to St John, cleared into the US islands and then...
- Met up with Helen, fresh from Amsterdam and here for two weeks exploring mostly Puerto Rico
- Went a few miles around to Gt Lameshur Bay in the National Park and had a very relaxed day and a half in this lovely spot.
- Helen took the kids for a hike then we met up and played volleyball on the beach
- Came round to Coral Bay for more nice snorkeling and then a trip to the local bar for a beer and burger
- Leaving early tomorrow for St Thomas to stock up with supplies in Charlotte Amalie
- Then depart probably Wednesday for Culebra, an island off the east end of Puerto Rico.
- Busy busy havin' fun, time flies when you're drinkin' rum. 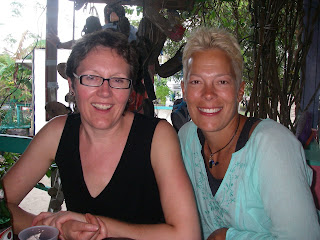 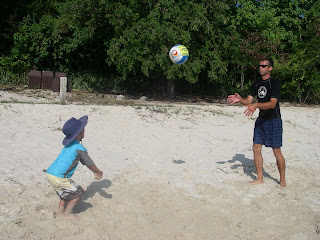