Scraping, painting and getting by ashore

The boat yard is right next to Sint Maarten's airport, a major destination for the holiday visitors. 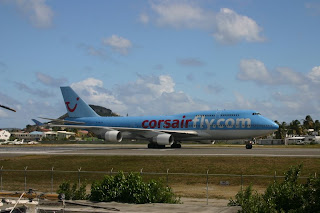 Planes of all shapes and sizes land and take off all day. The big jets lift off about a hundred yards from us with a deafening roar. When landing, they have already slowed down before they come past then they stop, rev up and turn around to taxi back to the terminal. We now know that the big Air France Airbus arrives at 2:30pm and leaves again two hours later. Today we discovered that a Thomson jumbo comes in on Thursdays, the biggest and noisiest so far. Max, of course, thinks this is fantastic. Since it stops at night, we tend to agree with him; we can stand on the deck of our boat and wave at the planes, probably being the first people these holiday makers see when they arrive in St Maarten!
Apparently, there is a bar called the 'Sunset Beach Bar' which is at the other end of the runway and you can actually feel the jetwash as the planes come and go - we've told Max it's where you can play on the beach and get a haircut from the landing aeroplanes at the same time. We'll go on Saturday and post some photos.

Being out of the water is a pain because the boat depends on the magic liquid for more than just support. Our toilets flush with sea water and whilst we have a tank to hold the output for a bit, we have to bring a bucket of water inside to chuck in as the flush. Fortunately there's a shower and toilet block on site which does for all except the middle of the night calls of nature. Our washing up also draws on seawater for the wash down, and drains to the ocean, so we're in camping style washing in a bucket and taking the waste water to the drain ashore. Last of all the fridge needs water to cool the refrigerant so we can't use it right now and are reliant on bags of ice from the store to keep the beers cold.

Wednesday morning we pack the kids off to the local day care blessing from heaven and get on with the job. It's got a bit bigger since large patches of paint are lifting off with only a gentle touch from the scraper. Flakes as big as my hand are peeling away. The boatyard is a wonderful place for free advice - most free advice being worth what we've paid for it - but there are some very professional and experienced folks here, and the consensus is that when the boat was given a protective coating some five or six years ago it was painted using the wrong primer which hasn't bonded well in some areas. In other areas, it's stuck like glue and will take a lot of work to remove. 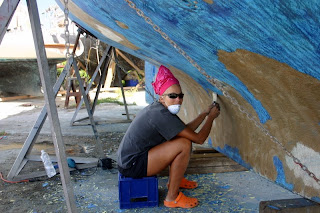 The proper, if you have time and money, thing to do is to take it all off and start again. The compromise we decided upon is to take off anything we can find that is loose, leave the hard stuck stuff and cover everything with a top quality primer before we antifoul. Since we are putting on well over a thousand dollars worth of paint, this is an important choice and we hope we've got it right.

We get stuck into the task right away. Both of us are good at this sort of thing, seeing Gesa in her painting clothes and headscarf, chipping away at flakes of paint brings back memories of renovating Akeman Street all those years ago and with the kids out of the way we are keen to get this job over and done with and be back in the water sailing to nice places instead of stuck in a boatyard. Within twenty four hours, we've gone over the hull with the flat scraper (get under all the loose bits), the pulling scraper (remove as much old paint as possible from the stuck tight bits) and an orbital sander (roughen up the surface for the new paint). 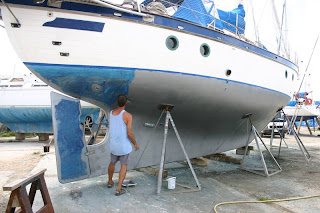 The passing boatyard opinion gradually changes tone from 'oooh, that's a big job you've got there, ha ha' through 'ahhh, another couple of weeks and you'll be finished' towards 'you're doing well there'. Later we get a comment about 'putting the rest of us to shame, working overtime' and know that, on some level, others are quietly impressed.

We, however, are disappointed to finish Wednesday with about an hour's sanding work remaining. (we lifted out Tuesday lunchtime) Thursday morning sees us up early so I can take the kids to the day care whilst Gesa finishes the sanding. As I return, we're ready to put the primer on. This needs three hours before we can paint the next layer, so we get stuck in, it goes well and is quickly done. Gesa wields the small brush round all the edges and fittings whilst I follow up with the Brut approach, splash it on all over. (British cultural reference to 80s advertising campaign there, sorry for the 80% of our readers who don't get it. Google 'Brut aftershave Henry Cooper' if you're that sad.)

We're now ready to put on the real paint - called 'antifouling'. The idea is that stuff in the paint stops the little critters attaching themselves to us. As you can imagine, the best answer is to fill the paint with awful poisonous chemicals and bob's yer uncle. Of course, such awful chemicals are now banned for us pleasure sailors (if you're the navy or a big cargo ship, you can use thousands of gallons of the stuff) The nasty stuff (called TBT) is soon to be banned for big ships too but you can still buy it here in the caribbean, although it's not legal for the USA where we are going. No-one would find out but we have a discussion about it and decide that if we're going to hold principles about looking after the environment then we should stick to them here too. Some of the newer paints claim to be as effective without long lasting environmental effects, so we go for that.

It requires a deep breath though, because the paint is $250 a tin and we need four tins plus another two of $100 primer. We could buy the dodgy nasty stuff for about two thirds of the price, and it would probably work a bit better too but at many turns in life you are faced with choices to do what's 'right' or what's cheap and fools that we are, we spend the money. Time will tell.

The primer dries nicely (I've been watching paint dry, folks, and believe me it's still better than a day in the office) and it's on to the antifouling. The active ingredients here are a 'biocide' and lots of copper. Gesa reads the labels carefully and is soon handing me the paper suit, rubber gloves and mask. Which is why I'm here in 28'C, wrapped up like an eskimo and gamely mixing paint for all I'm worth. The copper is heavy and likes to sink to the bottom of the tin as soon as you stop stirring so every pour into the paint tray requires a good thrash with the stirring stick. It's 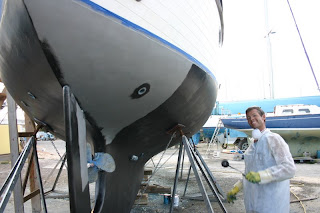 thick, heavy paint and hard to get it to cover, especially as it semi-dries almost instantly so running the roller over again lifts as much as it leaves. After about three hours I've developed an acceptable painting technique, but then I should have done because I'd managed to paint the whole hull.

We've recovered the kids and fed them, put them to bed and now I'm writing this as Gesa strumms on the guitar for the first time in many moons, inspired by a great 'pot luck' supper and singalong at the local bar last night, when a bunch of sailors cooked and got together with one of them playing songs for the rest of us.

Tomorrow sees another coat of antifouling and some other small jobs then we get to relax over the weekend before we get splashed again on Monday. It'll be nice to be floating again, and be connected back up to our plumbing system!

It seems like a version of 'spring cleaning' as I am trying to do here. Albeit I don't have to uproot our home from the foundation.

If I could I would send you a beer, all that scraping and painting...you sure deserve it!