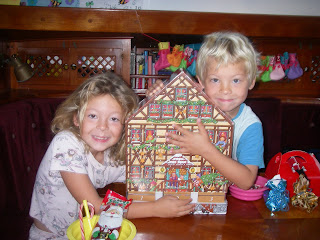 Today is Nikolaus, 6th of December when chocolate gifts are given and the countdown to Christmas begins. The kids were delighted to wake up to packages of goodies and, especially, the Lebkuchen House which dispenses a cookie each day till Christmas. As we said to our friends, we hunt down any festival involving chocolate and celebrate it, regardless of creed.

But this isn't the only treasure found today. Last night, Karla had been for an afternoon dip then changed and hung up her bikini on the rail. A couple of hours later it is noticed, with dismay, that the top is there but the lower half has gone. So either we have a failure to properly peg or there's a phantom bikini thief on the loose. Yan borrows the dinghy to search downwind in the darkness but finds nothing, unsurprisingly. Perhaps I can dive for it in the morning, he suggests. I look at him with my 'yep, sure you could' look. It's twenty feet deep, a bit murky and, well, you could search a big area down there. Karla reminds him that it's her new bikini that's only been worn twice and gives him a different look to mine.

Love wins over reason, and in the morning Yan dons a mask and free dives towards the sand. From half way down, he can see the bottom fairly well and dives again, and again. I would have given up by now, but after about twenty minutes of ear popping deep diving he surfaces with the missing bikini bottoms in hand. I am amazed, and contrite. Well done that man. Of course, I am most pleased to be reunited with one of the two missing clothes pegs, still attached to the scrap of cloth. His eardrums will never be the same but that's a small price to pay.

But Jost Van Dyke is a special place, where magical things happen, and our treasure hunting is not yet over. In fact, it had begun yesterday when, here in Great Harbor, we were having trouble setting the anchor in the thin sand. We tried about seven times before getting it to grip but on one try the anchor came up with a piece of rope attached, and it turned out to be a chain hook - a piece of line and hook used to transfer the load from the anchor winch. We'd just replaced our worn one with a new one, and now have an excellent spare.

After the 'miracle of the bikini', Gesa is looking across the harbour and sees some rubbish floating by. She's in the mood for a morning swim anyway so decides to be a good citizen and swim out to collect the irresponsibly dumped trash. I pass her a net bag and she swims off. A few minutes later she's back, very pleased - said trash turned out to be four full cans of beer. Lord knows how they ended up there but we threw them in the fridge and it's cold Red Stripe all round later.

We lift the hook and motor twenty minutes around to the gorgeous White Bay, picture perfect Caribbean beach, white sand, palm trees and all. The only downside is a cross swell that makes boats roll, but we are ready for this and lay out two anchors, pull ourselves around to face the swell and bob happily and comfortably with the back of the boat just yards from the beach. We all jump in gleefully and swim to shore.

On the way, diving to check our anchors, I find a pair of sunglasses and a towel. The sunglasses are useless, apart from making a good joke stepping out of the surf with a pair of oversized 'aviator' sunglasses on - they go straight to the bin, but the towel is fine. It's been a good treasure day, appropriately enough for an island named after an old Dutch pirate. 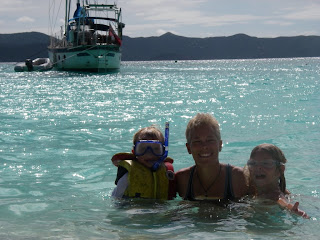 A bit of a day of finding treasures for me as well. Go to the mail box and what do I find...the long lost parcel for Max! Now I just need a place to send it. :)

We loved Jost van Dyke when we were there too!

Thanks Neil. Drop me an email will you, seem to have lost your address. Cheers to all, Nick.