Here we are at Manhansackahaquashawamock, as the locals used to call it before those pesky Europeans came along and renamed it Shelter Island. That's progress, see, easier place names. The island offers sheltered harbours and during 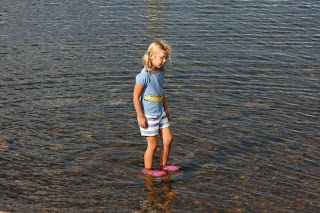 the 1660's it was also a shelter for persecuted Quaker refugees from elsewhere in New England. That's also progress, the pilgrims founded the place in the 1620's to gain their religious freedom and are now free to torment some other group of heretics instead.

This small island nestles in a bay at the east end of Long Island, some sixty miles from New York City. It is separated from the main bulk of Long Island by a mere few hundred yards on three sides, but that separation is enough to preserve the island feel, and the extraordinary property values. We are anchored in Coecles Harbor, a wide expanse of sheltered water on the East Side of the island. It is entered by a very narrow and shallow channel and as we felt our way in with just a couple of feet under the keel, nerves were a jangling despite the channel markers which turned out to be perfectly reliable, but might not have been... At least running aground here, in flat water and on soft mud, would have been an inconvenience not a tragedy but still, I suspect Gesa wouldn't talk to me for a few days after such an event.

Inside the harbor, the banks are lines with oak trees punctuated by large and exclusive homes, and the water is near glassy calm. This little island is surrounded by such perfect anchorages, hence it's name. We have merely walked ashore for a few hours, but we liked it, although the kids were in a foul mood for some reason which rather blunted the stroll along peaceful wooded lanes. We pride ourselves on bringing some contrast and colour to the local community as Max declares his disagreement at the top of his voice next to some five million dollar mansion. Ah well, they probably weren't home anyway, summer's over. 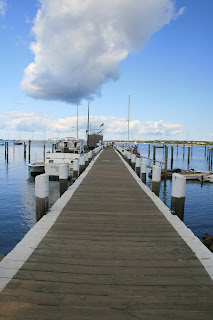 Which is interesting because it's like that round here. As soon as schools go back and the tourists stop coming it all goes almost dead. Stores and restaurants close or go onto winter hours with random long lunch breaks. At Block Island, the store said 'closed for lunch 12-1' as I pushed at the locked door at 3:30. The blackboard at the marina said 'hurricanes, wind, rain, snow, ice, see ya next year!' And yet the weather is pretty nice, the water is as warm as it gets and the year round residents love it. On Martha's Vineyard the paper carries an editorial that speaks for any such community - as the tourists disappear and take with them our source of income, we breath a sigh of relief, get our coffee without a line of ten people, swim on empty beaches and enjoy our town, then heartily hope they all come back next year so we can afford to live here.

Speaking of which, I have to tell you of an experience related to us by someone we met - in fact the editor of the Vineyard Times. She was in a coffee shop, in a line of people when the women behind asks, with a distinct and stressed New York accent, 'Do you mind if I go ahead of you, I'm on my vacation.'

Another thing that September brings is a little variation in the weather. Although this means some rain and grey days it also means wind. And to a sailor, that's all that matters. We've had the benefit of a cold front moving through bringing a very dramatic bank of cloud, some rain then a wind shift into the north, perfect for our trip from Cuttyhunk to Block Island.

The next trip, a couple of days later, saw the wind back in the south but not as far as the south-west so we could sail all the way to Shelter Island. Both sails were great, only a small amount of motoring and pretty much flat seas. It's good to use the canvas instead of burning diesel. What's also good is that the bluefish are here in numbers and we have taken two decent sized fish in the last two trips. Bluefish is a good, solid white fish. The taste is unexceptional - compared to mahi-mahi and tuna - but nice enough when fresh from the ocean and it makes a good chowder too. I'm not allowed to fish on tomorrow's trip as we have about four pounds of bluefish steaks in the fridge and that'll last us a few more days. Saves on the groceries at least.