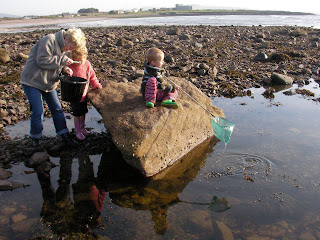 Our cottage overlooked Balinskelligs Bay, a very pretty arc of Atlantic Ocean bounded by the craggy hills of the Inveragh Pennisula. Half a mile down the road is a slipway to a beach with, at low tide, a good expanse of sand to one side and a mass of rockpools to the other.

Nana and Daddy took the kids to the rockpools to terrorise the local sealife. As is often the case, the pools looked fairly uninteresting at first, but of course, look deeply for long enough and you soon find lots of fascinating things. The trick was to find a way to hold Issie and Max's attention for long enough to look deeply. We found that dragging a net through the seaweed was a good way to catch small shrimp, which jumped excitedly (terrifededly ?!) in the net before being released into the safety of a bucket. Max enjoyed sitting on a rock sweeping the pool with the net and insisting that every shrimp he caught was transferred to captivity. 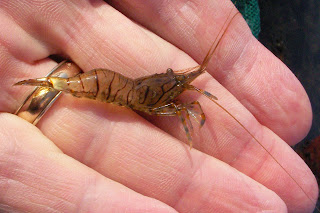 Meanwhile, Nana proved to Issie that turning over rocks can yield all sorts of delights. We began to find sea anemones clinging to the rock and little crabs running for shelter as the roof was removed from their home. Once we'd started looking, we saw more anemones all around the edges of the pools, many waving their tentacles in search of food. We'd bought along some bacon to tempt the crabs and found that tiny pieces were very attractive to the anemones, as soon as a bit of tescos best back bacon grazed a tentacle, it was grabbed and drawn in, to the great amusement of the children. 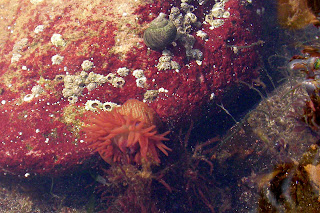 Is wasn't long before the bacon attracted a couple of crabs, and we managed to catch one in our net, but it is clear that crabs who live in rockpools are much more wary of bait than those who live in the mud at the bottom of rivers in Suffolk. Whilst the deep dwelling crabs grab the bacon and don't let go even as they are dragged out of the water, their canny Irish rockpool cousins have had to get used to death swooping from the sky and plucking them from their shallow home, so they drop the grub and scoot away at the first sign of movement from above. The trick is to slide the net in to one side of them and then wave at them from the other side - they dart away from the movement and into the net. Ha, gotcha. When the seagulls learn that trick, the crabs are doomed. 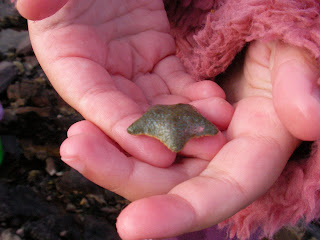 Issie and I spent a happy ten minutes just looking at a foot square area of pool and cataloging what we could find. Four different seaweeds, various snails, limpets, many broken shells, little things under rocks and so on. Since our children, and us to be honest, rarely get a chance to stand still and just look, we rarely see more than the surface details. It's good to slow down and wait for the eye to see through the initial image and into the wealth of life and depth beyond, where there is so much more to be discovered. I'm trying to get Issie to draw what she's seen in the pool, the ironic thing is that we haven't had the time.

This made me think of:

What is this life, if full of care,
we have no time to stand and stare.

No time to stand beneath the boughs
And stare as long as sheeps or cows.

No time to see, when woods we pass,
Where squirrels hide their nuts in grass.

No time to see, in broad daylight,
Streams full of stars, like skies at night.

No time to turn at Beaty's glance,
And watch her feet, how they can dance.

No time to wait till her mouth can
Enrich that smile her eyes began.

A poor life this if, full of care,
we have no time to stand and stare.