We've been going to the folk festival almost every year for the past 9 years, so when we realised that the festival was the week before I set off, we got tickets for the Friday night. With the kids being babysat, it was a chance to enjoy some good music, and we met friends there too. It was a lovely night, and thankfully dry, unlike most festivals so far this year.

Here then are our rather blurred photos of the acts we saw: 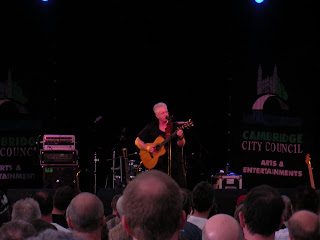 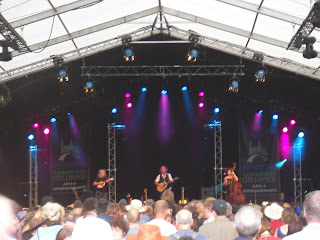 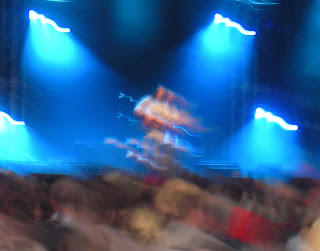 Here we sit in the quaint and quiet little port of Dover. A cross channel ferry leaves or arrives every 15 minutes, and the anchorage is very rocky - 'get me out of this rock and roll hell.....'. But it is a beautiful morning, and we've made very good progress so far.

I picked up Jeremy in Harwich, and we sailed the first few hours in beautiful sunshine and a good breeze from the North, before the wind eased and we decided to cheat, turned on the engine and motored on to Ramsgate to meet Melissa. If you ever visit Ramsgate, and the nice man at the marina directs you to the Eastern basin at low tide, and tells you there is enough depth, don't believe him. We came to a gentle stop in the soft mud and had to reverse out and inch our way through a 39 point turn to get to a different berth, but no harm done, and they didn't charge us for our one hour stop.

We set off right away for Dover, had dinner on the way and nipped into Dover harbour between the behemoths that take all those happy holiday makers and truck drivers across La Manche. Lit up like christmas trees, they speed into the harbour before performing an intricate dance to turn and tie up as the next one arrives or departs just yards away. It must be all routine for the captains of these ships but it's still amazing to watch from the deck of a slightly smaller vessel.

Leaving shortly to catch the tide round the headlands on the south coast, and hopefully heading for Chichester tonight.

PS - Naming your boat. If you buy a boat, think carefully about the name. Yesterday evening the coastguard were repeatedly calling for a boat called 'All Foxed'. She had been reported overdue for arrival somewhere, and the lady on the coastguard radio was very careful in her enunciation as she said 'All Foxed, All Foxed, All Foxed, this is Dover Coastguard, Dover Coastguard on channel 16'. Eventually, another boat replied and said 'we're in the marina and All Foxed is on the next pontoon'. 'OK sir, thanks for that, would you mind going and asking him to call his wife? Over.'

Prepared and ready (as we'll ever be)

And suddenly the time has come to head off. Gesa and the kids have just left and waved goodbye - we've never been apart for as long as we will be this time - and I'll miss them. The boat is packed, secured and ready to go.

I'm doing some gentle passage planning before turning in for a quiet night. And it will be very quiet, for the weather gods are being kind and giving us a calm night, with gentle breezes predicted all week. We may burn some diesel but we won't be bashing into a gale!

There's a magnet on our fridge at home that repeats the old quote (possibly Twain) about regretting the things you didn't do more than the ones you did, and urging us to 'throw off the bowlines, set sail, discover'. It's time to set sail. We leave at 09.30 GMT, Monday July 30, 2007.

Getting ready to go

It's all a bit crazy right now, as immense quantities of food are bought and loaded on board, last minute tasks are done or scratched from the list, and we shuttle back and forward trying to remember everything and keep the kids fed and amused at the same time.

Nick sails from Ipswich on Monday morning, destination Plymouth. Then leaving Plymouth on Sunday, destination Tenerife. If stuff isn't on the boat now, it has to come out in a suitcase in August, so we're checking every room in the house and filling up the lockers on board.

Got to go now - more later. 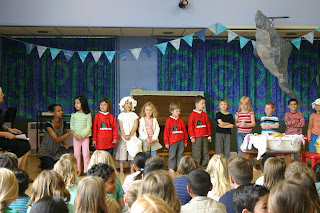 Three times a year, Issie's class have an assembly presentation, where parents are invited along to watch and they tell us some of the things they have been doing, and do a few stories and performances. 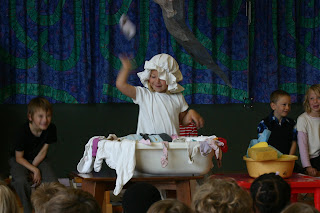 This term was all about water, they had been building boats, models of dolphins, paintings of shells and many other things.

But Issie had one of the starring roles - she'd kept that very quiet and we didn't realise till we saw her! - she was 'Mrs Lather' who runs a laundry but hates washing socks (she throws them over her shoulder) and decides she doesn't want to wash laundry.

The customers bring her other things, so she ends up washing babies, dogs, cars, a football team and eventually an elephant! It was all great fun and the kids did really well, although there were times when the whole cast was at risk of collapsing into giggles. 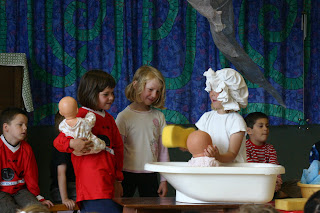 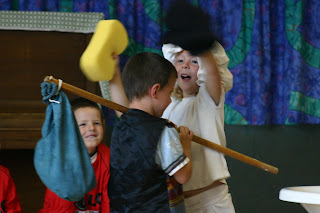 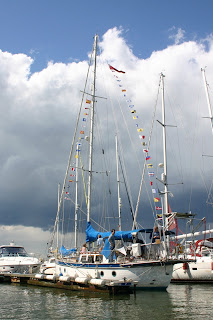 We dressed Ty Dewi overall in the signal flags, a traditional symbol for a celebration 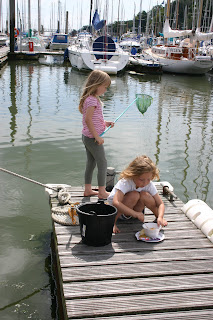 Fishing for crabs from the end of the pontoon - many were caught although Issie is eating cornflakes for breakfast, not fresh crab! 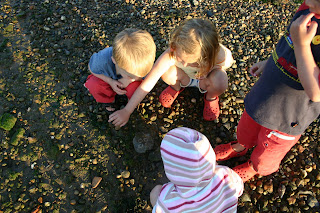 Finding jellyfish washed up on the beach 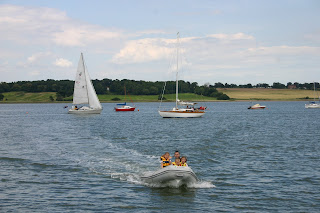 Dinghy rides on the river 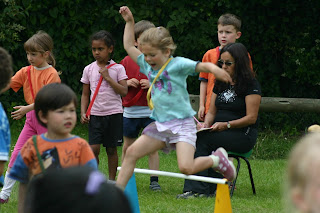 Coming up to the end of term, and it's time for lots of great events. Sports day saw the school divided into teams and competing together with plenty of running, jumping throwing and rolling. Here's a selection of photos from the day, being: 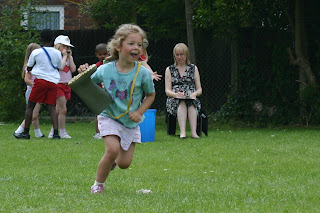 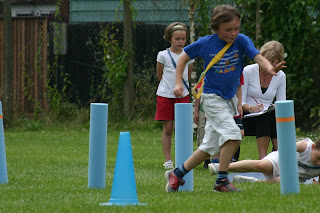 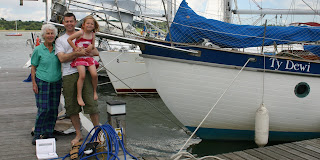 We had a party this weekend, inviting our friends over to the boat (more pictures later), and we were honoured to be visited by Margaret, who has known Nick since he was born and is a very long time friend of the family. She is partially responsible for me getting into sailing, having put Dad and I in touch with her friends at the Royal Northumberland Yacht Club back in the 80's.

She is also one of the most amazing women we know. Now over 90, she drove down from Durham to Cambridge to stay the night, en-route to an annual engagement singing at the Albert Hall. Margaret has been a chorister as long as we have known her and shows no sign of letting her advancing years (and a touch of deafness) get in the way of that. She is also reknownd for adventurous holidays, and tells me that she has booked a cruise in the Caribbean in November - she says that a normal cruise would be boring but this one visits the Orinoco and Angel Falls so is much better!

Here's to you, Margaret, and many more years of adventuring and entertaining.