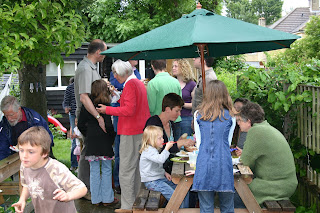 Every year, in the middle of June, we have our summer party and invite our friends around to enjoy a bar-b-que in the summer sunshine. Sometimes the sun shines, and sometimes, well, this is England.

This year, it was also something of a farewell party, as many people may not see us again for some time, and because of that, we had many, many visitors and some coming from far and wide to be with us, which was wonderful.

The rain held off for most of the day, and the garden was filled with children making the most of our new hammock and all the other toys in the garden. The queue at the barbie was lengthy as everyone vied for the first sausages, and the salads that we had so carefully spent all morning making were gone in the blink of an eye - so at least they must have tasted OK. 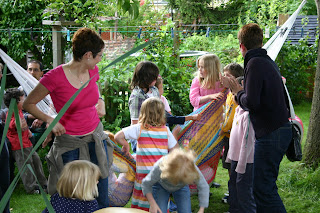 One of our guests brought some party-poppers and sparklers, so we sat the kids down in a big circle around the campfire and carefully let off the party poppers before giving them all a little wave of the sparklers. Amazingly, no injuries resulted! 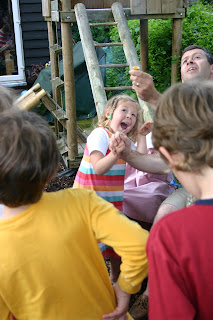 As the parents took their children home, others stayed and chatted on into the night, as we made a good sized dent in the collection of malt whisky and even did our best to get rid of some of those weird spirits that lurk in the back of the drinks cupboard. Ukranian cherry vodka, anyone?

Another great gathering at this house, and one of our last, which is somewhat sad but we look forward to many similar occasions in our new homes in the years to come. Meanwhile, 61 Akeman Street passes onto new owners who will hopefully have their own share of wonderful times in this house.

I was there in spirit! It looked like a great day, great weather and lots of smiling faces.