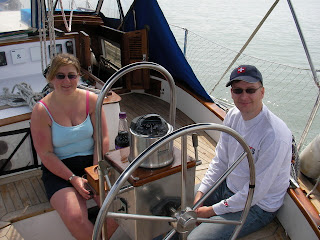 With a little over two months to go until we depart for the Canaries, the crew gathered for a weekend get together in order to spend some time on their trusty vessel, with their less trusty but perfectly crusty skipper. Guy and Melissa, however, delayed their arrival by a day due to other commitments - hopefully Ty Dewi will not remember that when delivering them to their next port!

So it was on a beautifully sunny and warm Friday morning that Nick, Owen and Amanda motored down the river in very little wind. With a course charted for Burnham, some eight hours away, we set the autopilot and enjoyed being afloat and together as a crew again over twelve years since we chartered a little Sadler 24 in the West Country.

Turning west around the end of the Gunfleet Sands, a nice breeze sprung up and we hoisted full sail and gently rode the zephyrs most of the way up the River Crouch before we picked up a mooring off Burnham on Crouch. There's some video here


Guy's train was due in at half eight, and Melissa an hour later, so we motored in to pick up Mr Hargreaves, then retired to a waterfront pub to await the arrival of our fifth crew member. Right on time, she arrived to join us in our next pint, and it was nearly 11pm before we were back on board eating dinner. We retired well content and ready to enjoy the next day's sailing.

With the forecast worsening at every broadcast, it was clear that Sunday was going to be a less than pleasant day, so we took the chance to sail up to Brightlingsea on Saturday. Short tacking along the narrow river channels made the crew work hard for their lunch, but once through the Wallet Spitway (a narrow gap between the sandbanks), we bore away and make good speed to the River Colne. 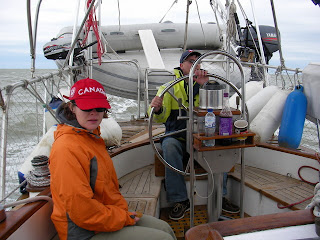 Dropping the anchor off Mersea island we headed into town and enjoyed a few beers and chat in the Yachtsman's Arms. To be recommended. The night was flat calm and we slept extremely well, but the forecast hurried us along and we had agreed to be awake and away at 8am.

There was plenty of wind, a good force 5, but as it always seems, it was right on the nose so we motored into a lumpy sea, never a satisfying experience and the crew's stomachs agreed. After what seemed an age, we turned the corner at Walton and headed north - now we could sail so we hoisted canvas and enjoyed 10 minutes romping along at full pace before the wind died and the heavens opened. The law of Sod and all that. Whilst I was happy in the pilothouse, keeping fairly warm and dry, those who hadn't got their sea-legs preferred to stay on deck, so it was a crew of fairly well drowned water rats that finally picked up the mooring at Woolverstone. 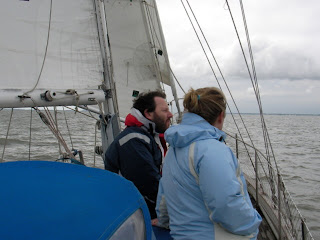 A couple of hours later, a tidy Ty Dewi and a tired crew parted company, and I think we're all ready to meet again in a couple of months to head South. Adieu.