Just four bolts and up she comes. Or maybe not. The engine mounts support 1000lbs of Mr Ford's best ironwork, with four large nuts holding it all down. We pieced together enough extension pieces to the socket set to reach down the two and a bit feet and leant on the ratchet.  Nothing moving. Add a long piece of tube to the ratchet handle and lean on it a lot more. Creak, click, movement. And more, and the first nut is off.

But the second wasn't so easy. Eventually it moved, but it spun the whole stud, we'd sheared or shifted the stud on the engine mount. Now, these mounts will all be replaced anyway, so that's not too bad, but how to free it all up? The mount itself is bedded onto the stringers with two bolts, so we set to it and pulled those. Which worked fine, so on we go, and pulled all the hold-down bolts so we could lift the engine, mounts and all. And lift she did, an eighth of an inch with each crank of the chain hoist. 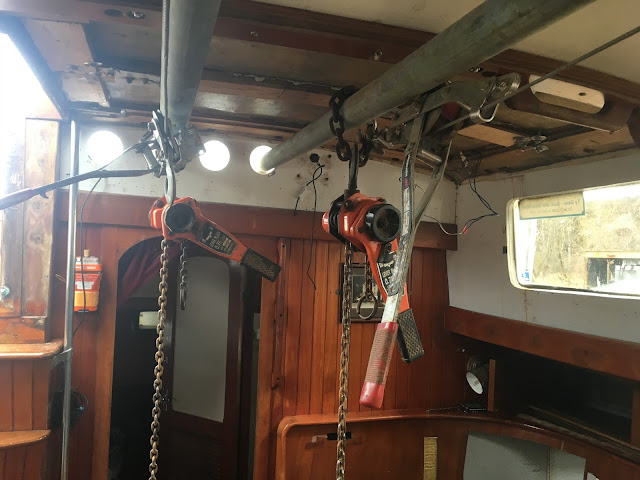 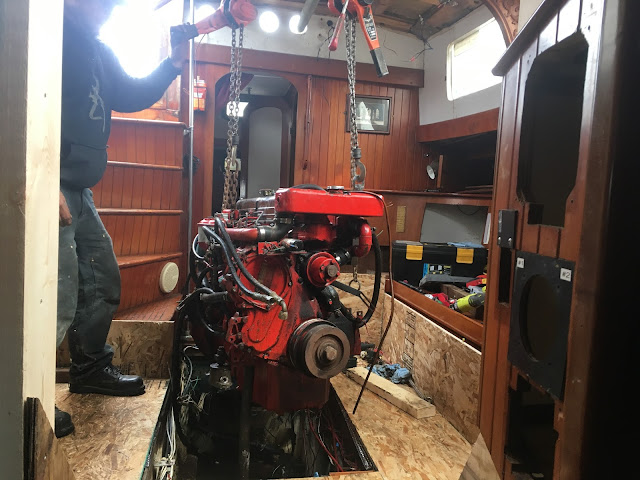 A pair of come-alongs helped us slide the hoists forward along the lift tubes as we went and inch by inch we got the engine up and onto blocks in the saloon. A little more effort and we had the gearbox separated too, and it's time to think about what next. 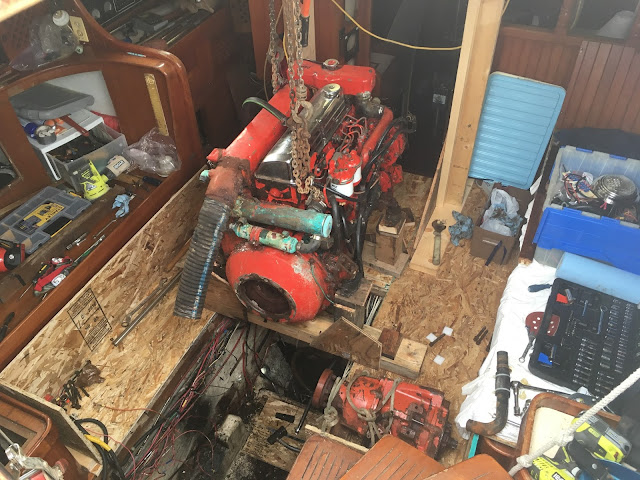 The options are to leave it here, work on the engine and drop it back in. Sounds sensible, which is why it's been plan A. But really, I want to degrease and wash the engine, take lots of stuff off and replace, then reassemble and repaint. It means turning the saloon into a workshop for a while yet. And there's so much else to do in there.

So plan B is to get the engine out and off the boat. We get in and out through the companionway hatch. It's not all that big. The engine is smaller than the hole, but only just, and only if you lift it out on end. The opportunity for disaster is significant.

Overnight, I devise plan C. Plan C is actually pretty simple. Cut a bloody big hole in the roof and lift the engine out with a crane. As it happens, the coachroof has some solid structural supports just far enough apart to let the engine come out between them.

We took a core of the roof to see what it was, 1/4" fibreglass, 5/8" ply then another 1/4" glass. That's a lot of strength, and plenty of thickness to lay in new plywood and glass when the engine's back in. So we took the circular saw and sliced ourselves a new hatch. Brutal, but effective. 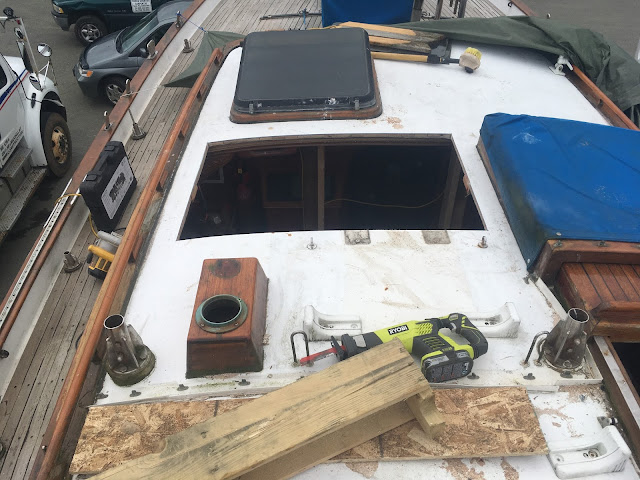